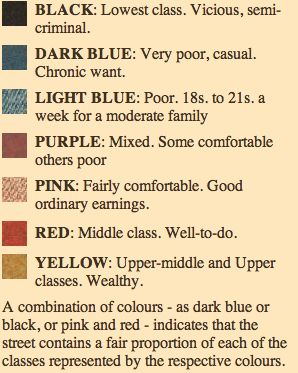 In1902 Victorian reformist Charles Booth published the latest in his series of ‘Poverty Maps’, maps of nearly all of the streets that now exist within zones one and two. Deptford was designated ‘District 45’, Clerkenwell ‘District 5’ and Whitechapel ‘District 7’. The streets were assigned colours according to their socio-economic groupings and these groupings, along with their sometimes dubious descriptions are shown below. In ‘The Life and Labour of the people of London’ (1902) Booth described his aims and methods:

“My first attempt was to enumerate the mass of the people of London in classes according to degrees of poverty or comfort and to indicate the conditions of life in each class. In connection with this attempt I mapped out the streets in colours and endeavoured to show by sample descriptions the kind of persons dwelling therein, their habits and the manner of their lives. My principle aim is confined to the descriptions of things as they are. I have not undertaken to investigate how they came to be so, nor except incidentally to indicate whither they are tending and only to a very limited extent, or very occasionally, has any comparison been made with the past. These points of view are deeply interesting and not to be ignored, but are beyond the scope of my own work.”

Booth’s Deptford uses the notes made for Booth and following the actual route walked with local policemen in the Summer of 1899 and lasts a full three hours and fifteen minutes.

At key points along the route walkers are invited to recite passages from Dickens, Marlowe, Conrad, Elizabeth 1st, John Evelyn and Captain Bligh. We will also read documentary evidence from the coroner’s report on Christopher Marlowe’s death and from reports on the effects upon Deptford of German rocket attacks.

Booth’s Clerkenwell uses notes from walks with local police in Clerkenwell in 1898 and discovers an area of greater socio-economic variety. This walk is two hours and fifteen minutes long.

Walkers can recite excerpts from Dickens, Pepys and Shakespeare. They will learn about deadly Zeppelin bombing raids, about Harris the Sausage King of London, about the inventor of the world’s first automatic gun, about ‘Little Italy’ and also how gangster Mad Frankie Fraser earned his stripes.

Booth’s Whitechapel uses notes from walks with police in 1898 in the very area Booth started his project over ten years earlier. This walk is around two hours and fifteen minutes.

Immigration is the obvious theme here and we hear from Jack London, Israel Zangwill, Arthur Lloyd, and also some contemporary writers.

Our brand new walk is Booth’s Westminster covering an area to the east of Victoria St known to Victorians as ‘The Devil’s Acre’ because of its extreme poverty so near to the Cathedral and Parliament. Partially cleared by Booth’s time, pockets remained poverty stricken. Dickens, Oscar Wilde and Cardinal Wiseman help to complete the picture, and a curious tale of the long struggle for legal homosexuality in Britain emerges. Around two hours.